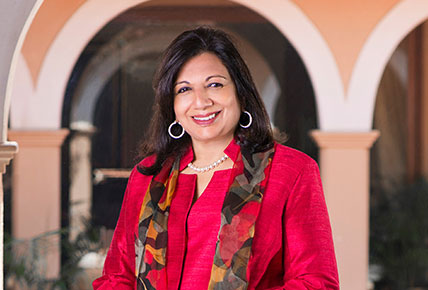 Dr Kiran Mazumdar-Shaw, a pioneer of the biotechnology industry in India, is the Chairperson and Managing Director of Biocon, India’s leading biopharmaceuticals company. Named among TIME magazine’s 100 most influential people in the world, she has made her country proud by harnessing the power of biotechnology through affordable innovation to make world-class therapeutics accessible to patients around the globe. Under her stewardship, Biocon has evolved from an industrial enzymes company to a fully-integrated, innovation-led, emerging global biopharmaceutical enterprise committed to reduce therapy costs of chronic conditions like diabetes, cancer and autoimmune diseases. Today, Biocon is the only publicly listed biotechnology company in India.

Ms. Mazumdar-Shaw is the founder member of Karnataka’s Vision Group on Biotechnology and currently chairs this forum. She also serves on the National Advisory Council of the Government’s Department of Biotechnology, where she has been instrumental in bringing government, industry and academia together to chart a clear and progressive growth path for Biotechnology in India. Ms. Mazumdar-Shaw is a part of the U.S. Pharmacopeial Convention (USP) Board of Trustees and is also a Member of the USP Biologics Advisory Group.  She also serves as Member, Governing Body and General Body of the Indian Pharmacopoeia Commission, an autonomous body of the Government of India

Ms. Shaw is the recipient of several awards, the most noteworthy being the Padmashri award which was conferred upon her by the President of India in 1989 and the Padmabhusan award in 2005. The U.S.-based Chemical Heritage Foundation conferred her with the ‘2014 Othmer Gold Medal’ and Germany-based Kiel Institute for the World Economy awarded her its coveted ‘2014 Global Economy Prize’ for Business.

Ms Mazumdar-Shaw is also an Independent Member of the Board of Infosys, a global leader in consulting, technology and outsourcing solutions. She has also been the Chairperson of the Board of Governors of the Indian Institute of Management, Bangalore.