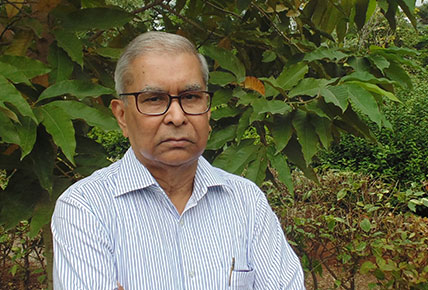 Dr. C. M. Gupta, who is currently working at IBAB as Distinguished Professor & Infosys Chair, is a Medicinal Chemist and Membrane/Molecular Biologist, who has published about 150 original research papers spanning different areas of Chemistry and Biology as wide as drug design, phospholipid and peptide synthesis, immunomodulation, drug targeting, mechanisms of maintenance of transbilayer phospholipid asymmetry in biological membranes, and structure and functions of actin cytoskeleton in Leishmania parasites. He has also been awarded five patents. Prior to joining IBAB, he has served as Director first at Institute of Microbial Technology (CSIR), Chandigarh for five years, and then at Central Drug Research Institute (CSIR), Lucknow for more than ten years. After his superannuation from CSIR services, he continued his research activities at Lucknow until August 2014, first as Distinguished Biotechnologist and then as Distinguished Biotechnology Research Professor under the Department of Biotechnology (Govt. of India). He has been a recipient of a large number of honors and awards and is a fellow of several academies, including the Third World Academy of Sciences and the Indian National Science Academy, and has served as a member/chairman on several important national and international committees.

Further details are to be found at https://www.ibab.ac.in/research/dr-c-m-gupta/